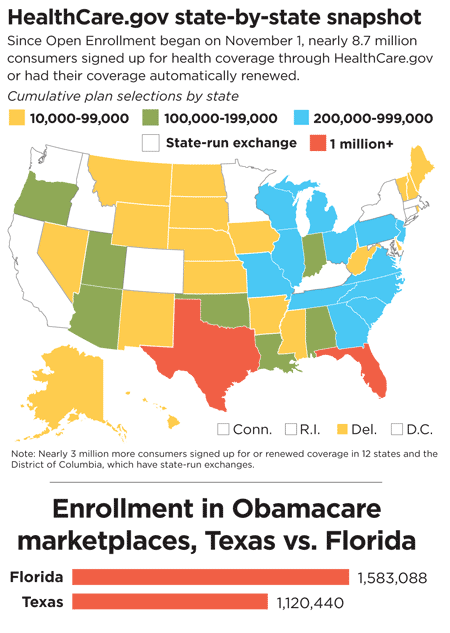 ​AUSTIN — When it comes to signing people up for Obamacare, Florida is crushing Texas. And it’s not even close.

Nearly 1.6 million Floridians have signed up for or re-upped their private insurance plans for this year through HealthCare.gov, compared with just 1.1 million Texans.

Advocates, leaders of outreach and enrollment organizations in both states and others who closely follow the health law speculated that Florida may be outperforming Texas in sign-ups for three major reasons.

The Sunshine State is more compact. It fielded a bigger, centrally managed army of trained helpers. And its GOP leaders haven’t imposed as many roadblocks as Texas’ leaders have.

While nearly 60 percent of Floridians eligible to buy policies in the online state exchange actually purchase them, only 36 percent of eligible Texans do, the nonpartisan Kaiser Family Foundation estimates. Nationally, the take-up rate is 41 percent, it says.

Leading Texas supporters of the Affordable Care Act admit they watch with envy as Florida outpaces other Southern states.

“We’re just pleasantly surprised Texas is as close to the national average as it is,” said former Texas Medicaid official Anne Dunkelberg, who supports and does research on Obamacare as associate director of the Austin-based Center for Public Policy Priorities.

Across most insurance markets, the law bars denying people coverage or charging more for pre-existing health conditions. It improved and reduced the cost of prescription drug coverage under the Medicare program for seniors. States were able to add poor adults to their Medicaid program for free for several years and on very generous terms thereafter.

For nearly six years, Republicans have blasted Obamacare as a misguided, one-size-fits-all attempt to remedy flaws in what they describe as the United States’ high-quality medical care system. Republicans say the law has hurt, not helped, that system. But so far, they’ve been unable to repeal it.

Two conservative analysts emphasized Florida’s higher median age may be another key factor why the state has outpaced Texas in sign-ups — 40.7 years in the last census vs. 33.6 years in Texas.

Economist Devon Herrick of the Dallas-based National Center for Policy Analysis said exchange policies usually carry with them federal subsidies, which would be attractive to early retirees.

In the federal government’s latest numbers, 49 percent of purchasers in Florida’s exchange were between ages 45 and 64. In Texas, people that age accounted for 44 percent of the buys.

She stressed other factors, such as Texas’ sprawling geography and differences in the two states’ nonprofit groups that received federal grants to hire application counselors known as “navigators.” Texas’ networks have been “pretty fragmented,” she noted.

Other analysts and activists in both states pointed to subtle differences. Florida is further down the road in shedding its rural heritage. It has larger groups of Cuban and Haitian immigrants seeking refugee status, who generally can enroll in Medicaid or buy into the exchanges. Florida has more insurance agents and brokers hawking exchange policies.

South Florida cities, including Miami, have seen a proliferation of storefront sign-up locations run by agents and brokers. Many have put up signs or pay people to walk alongside traffic carrying placards.

“When you go to Miami, it looks like everybody and their brother is selling Obamacare,” said Annette Raveneau, the national Latino press secretary for Enroll America, a nonprofit with ties to the Obama administration. “You see signs everywhere, ‘Obamacare here. Obamacare here.’ I’ve never seen that in any of the cities I’ve traveled to in Texas.”

With two weeks left to sign up, U.S. Health and Human Services Secretary Sylvia Burwell has intensified her travel to Texas and Florida because they represent mother lodes of potential enrollees. For years, they topped all other states in percentage of uninsured residents.

Last fall, Burwell made a point of naming Dallas and Houston — and Miami —among five “target cities” for a bigger push. Since then, she has visited Texas four times and Florida, three.

Miami alone, though, has enrolled more than 90 percent of all those signed up in greater Dallas and Houston combined — though the three metro areas are roughly comparable in population.

“Florida has less than 75 percent of Texas’ population, crammed into one quarter of our real estate,” said Dunkelberg, the Austin-based analyst who supports the law.

Even before the Affordable Care Act, Texas has been tightfisted and generally unwilling to help pay for public awareness campaigns and application helpers for government health programs, she said. The drought of state funds — and federal and private financial support — has especially hurt rural counties, she said.

“Support for outreach, education and enrollment activities from both federal sources and philanthropy rarely if ever is adjusted to accommodate Texas’ vast geography,” Dunkelberg said.

In Texas and two other Southern states analyzed by Harvard public health researchers last year, receiving assistance in filling out the applications was the strongest predictor of successful enrollment in coverage — far bigger than race, sex, level of education and income and whether someone applied online, at a hospital or a state benefits office.

But Texas, by adding 20 hours of state-prescribed training for the federally paid “navigators” who help people sign up, went further than Florida in discouraging nonprofit groups from sticking their necks out to try to help the exchanges work, analysts said.

“Both states are certainly not the warmest politically to the Affordable Care Act, but Texas has put more strenuous requirements on their enrollment assisters than Florida has,” said Jennifer Sullivan, who heads a best practices institute at Enroll America, the group pushing sign-ups across much of the country. “They’re more intense.”

United Way of Tarrant County, which was Texas’ biggest recipient of navigator grants the first two years of exchange operations, withdrew last year. Chief executive Tim McKinney acknowledged some of his board members probably dislike the federal law. But he said managing the effort took far more time than expected, as he had to testify at insurance department hearings in Austin and grant scores of media interviews.

Florida Covering Kids & Families, based in Tampa, has been the chief recipient of navigator grants in that state — and largest single recipient in the nation.

“We’ve been doing this for Medicaid and [Children’s Health and Insurance Program] for 20-something years,” said project director Jodi Ray. “We were already trusted. We already had relationships with people who were trusted in communities. We didn’t invent the wheel when the first [Obamacare] open enrollment came. We just made it bigger.”

Several activists and analysts said Texas’ immigrant population is different from Florida’s and poses big hurdles. The Pew Hispanic Center says 1.65 million Texas residents in 2012 were in the U.S. without permission, compared with 925,000 in Florida. Unauthorized immigrants cannot buy in the exchanges or qualify for Medicaid and CHIP.

Garcia, the Enroll America Texas director, said families that include immigrants in the U.S. illegally and spouses and children who are legal residents often fear to sign up for Obamacare because they must provide the names of everyone in their household — even though Burwell’s department keeps that information confidential.

“It keeps people away from looking at what their opportunities are because they’re afraid … a member of their family might get deported,” she said.

“It’s a huge fear here, but it’s probably bigger there” in Texas, she said.

Hispanics and rural residents are among the most difficult people to reach with counseling and information about the exchanges, studies have shown.

In 2010, Texas was home to more rural residents than any other state — more than 3.8 million. They accounted for 15 percent of state residents, compared with less than 9 percent in Florida, which had 1.7 million rural people.

Brennaman said there probably are more cities in Florida that lean left politically than in Texas. Obama carried Florida twice, she noted. That makes a difference, she said.

“There are areas in Florida where we see lots of favorable action, favorable political climates toward the Affordable Care Act,” she said. “I don’t know if you have that in Texas.”

Three reasons why Florida is outpacing Texas at Obamacare enrollment:

Bottom line: In Florida, it’s easier logistically to meet face to face with a greater percentage of the people who need help figuring out health insurance. And the Sunshine State has fielded a bigger, centrally managed army of trained helpers to get the job done.