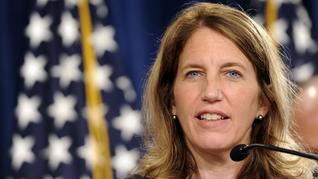 Sylvia Mathews Burwell, the head of U.S. Department of Health and Human Services, visited Orlando on Monday, encouraging local leaders to make a final push for Obamacare sign-ups as the open enrollment deadline approaches on Jan. 31.

Meanwhile, Florida is among 20 states that have not expanded Medicaid, leaving many of the working poor with no affordable health insurance options. While the topic took the center stage during last year’s legislative session, it is highly unlikely that it will be brought back to the table this year in Tallahassee.

“Our door is always open to work with the governor and the state to find a plan that can work for Floridians,” said Burwell, who made a brief stop at Chef Eddie’s, a soul food restaurant on West Church Street in downtown Orlando, on Monday morning.

This year marks the third cycle of open enrollment for the health insurance Marketplace. Consumers – old and new – are more educated, and “coalitions across the country are more solidified and certainly here in Florida,” said Burwell.

The Central Florida Enrollment Coalition, for instance, was formed last October, as a result of collaboration between local hospitals and community organizations, including Heart of Florida United Way.

The agency, which was one of Burwell’s stops on Monday, made its 2-1-1 call service available to callers who needed help signing up for health insurance.

Also different this year is the elimination of special enrollment during tax season, which was offered last year. The penalties for not signing up for a health plan has increased from a minimum of $325 per person in 2015 to $695 this year.

The administration has also made efforts to make the website healthcare.gov faster and easier to navigate and has added tools such as an out-of-pocket estimator, said Burwell.

“People were selecting plans a lot based on premiums and they needed to think about deductibles and co-pays as well, so that tool really helps them think about their total cost,” she said.

But some consumers still have mixed feelings about the coverage.

“I’m glad it did happen, you do need some insurance, but some people still can’t afford it,” said Jamie Bush-Ryals, a customer at Chef Eddie’s, who has non-ACA health insurance coverage. “And some people who get it, can’t find a doctor who takes Obamacare.”

And she worries that maybe the implementation of the Affordable Care Act has made insurance more expensive for others.